Dom Ainsley is currently on the Lakeland fells attempting to set a new winter record for the completion of all 214 Wainwright’s.

There is no record currently set for a winter round, but Ainsley is also eyeing up Paul Tierney’s summer record of 6 days, 6 hours and 5 minutes.

The project has been titled #2x214Wainwrights. Live tracking for the winter record attempt can be found here.

Scroll down the page for more information on who Dom Ainsley is.

Do you know Dom? Are you out supporting him? Live locally and have shots of conditions? Share images, stories and videos to up2summit@gmail.com.

19:03: Dom has posted an update on Facebook saying he is stopping. He has said he is still determined to complete the #2X214Wainwrights but will postpone his winter attempt to December due to severe conditions.

Thank you to everyone who has followed the live stream and well done to Dom and his team.

17:09: Stand down. Looks like it’s over…unless he’s off for a pie and a pint/ return his pricey tracker. How would it sit with everyone if he came back tomorrow? Still valid? Hardly a single push then, is it? Will check again later to see if he’s gone back and then give my congrats etc.

13:30: Still no movement on the ground according to Open Tracking. There seems to be/has been some disruption in communication between Dom and would-be supporters, and lack of correspondence from support vehicle. No one sure where everyone else is right now.

10:00: No updates as yet. Signal in Langdale Valley is quite patchy. He is 27% of the way through with 4 days under the belt. Does that mean – if he continues – he will be out for just under 16 days? Questions being asked as to whether finishing in March constitutes a “winter” round. At least it’s a leap year…  Weather on Bow Fell to be light snow showers, fog and 43mph constant wind. Wind chill -14C. (Total time: 98:50:18)

07:50: Morning, everyone. Where are we? Dom headed into the Langdale Valley last night and, according to a Facebook post, was unable to contact his support vehicle for 5-6 hours. Mentally, that will have taken a bit out of him. He has since met up with them, and appears to have been transported round to Wrynose Pass. He hasn’t sent out a signal since before midnight, but it is possible he will be moving in the next hour. Will he head up Pike of Blisco, head back to Long Top and return to Cold Pike? (Total time: 96:40:10)

20:12: Post from Paul Tierney on Fellrunners UK: “Myself, Charlie Day and Matthew Beresford went in search of the Dom today on his Winter Wainwrights attempt and trotted for a couple of hours with him. Suggested he accompany us down to Langdale to get out of the grim conditions for a bit but he was having none of it. He eventually decided very sensibly to pop down the band and get a bit of shelter in langdale. I think the 3 of us were in agreement he’s as hard as nails. I’ve no doubt he is strong enough to get round. Just hope the weather gets a little kinder for him over the coming days. Not safe to be on your own in those conditions.”

18:52: A wee birdy tells me Rob Jebb has been out with Dom today. Reports suggest he’s heading to Old Dungeon Ghyll for shelter – unsurprised!. Anyone know if there’s a winter record for a Wainwright’s pub crawl?

17:43: Is this the end? Ainsley is making his way down Bow Fell into Langdale. Support vehicle hasn’t pinged location since 13:37 so unsure of location. Is he calling it a day? Expecting Seathwaite was original stopping point today – a long way away. Weather has reportedly been garbage all day. Just 10 summits touched. Is he collecting himself before another bash tomorrow? Maybe in the Old Dungeon Ghyll! (Total time: 81:20:35)

14:23: Went for a run – what did I miss? Got to hand it to him – every time he seems down, he gets up again. Reports on the ground suggest deep drifts in places along the ridge, potentially explaining the wide detour. Currently ascending to Great End. Split between Lingmell and Scafell Pike only 3 minutes slower than Paul’s, so he appears to be moving relatively well. But cannot compare individual splits too well. (Total time: 78:58:54)

12:48: Dom appears to be taking the longer route around the base of Scafell Crag. Rough ground above and quite a way to drop down. Not sure how he will get back up to main path. The wind is quite strong too, so may be seeking some shelter. Tracker has not pinged since 12:39. (Total time: 76:58:12)

09:29: He is up and moving. Day four starts from Wast Water, taking in the Eskdale Fells before heading over to Scafell Pike. Weather on Scafell looks sub-optimal, with 60mph gusts and rain/hail. At least there is little quibble as to whether this is being done in winter conditions. Will he hold up for the following days in sodden shoes and constantly wet clothing? Split from Buckbarrow to Whin Rigg is 12 hours 22 minutes. He is a full day behind Steve Birkenshaw’s summer schedule. (Total time: 74:12:29)

19:35: End of day three in sight – just! Support vehicle has been in place at base of Buckbarrow. Dom has been slogging away over Yewbarrow – perhaps the most monumental 627m mound known to Lakeland fell runners. As he progresses, there has been a growing support over social media. I will hopefully get a more detailed update once he reaches his support team.

14:45: Dom has been going for a total of 55 hours and has touched 40 summits. Currently making his way around the southern Ennerdale fells and onto Yewbarrow shortly. Webcam shot below is taken from Wasdale. According to post from his support team, he still aims to complete in 7 days – tough to see that happening. 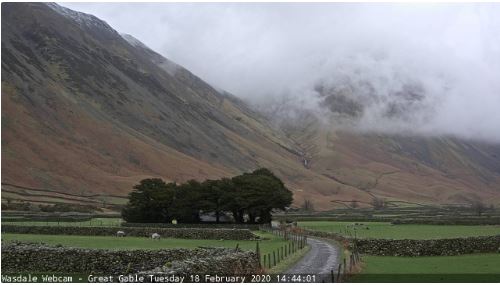 11:30: We are on the move again. Ainsley got onto Gravel Fell just after 23:00 last night and has just started up on day three. Thirty-six fells in that time, a little over 16%.

16:20: That’s Dom finished the southern Buttermere Fells. A lot of running into the wind all day.

10:50: Just touching the top of Kirk Fell. Not a bad time from Great Gable of 44 minutes – 15 minutes slower than Paul’s split. Weather in Borrowdale appears reasonable, but wind speed high with gusts up to 40mph at groundlevel!

05:10: Long overnight stop. If tracker is correct, a full 10 hours spent in Stonethwaite.

21:11: Update on the ground: “Weather was beautiful but wind very serious on top of Place Fell around 2pm this afternoon.” Storm Dennis appears to have left large parts of the fells sodden.

13:55: Ouch. The Pewits must be stodgy today. Storm Dennis still knocking about. Down into Rosthwaite over 6 hours since setting off. Slowly building into it?

07:15: And he is off! Reportedly was set to start at 04:00 but weather has likely put pay to that idea. It will be hard to compare times with that of Paul Tierney or Steve Birkenshaw who both made attempts in summer.

Who is Dom Ainsley?

Dom Ainsley is a relative unknown in the fell running community, seeming to be more associated with mountaineering and climbing.

According to his sponsor Ellis Brigham’s biography, Ainsley is a 23-year-old “climber and mountaineer who has been in and around the mountains his whole life, but recently developed an idea for a series of endurance events that would really challenge him physically and mentally in the hills.”

As well as Ellis Brigham, Ainsley also acquired sponsorship from Audi a month ahead of his record attempt.

He announced he would be attempting the #2X214Wainwrights attempt back in September 2019 on his Instagram.

After months of training in the Alps and the UK, Dom Ainsley has set himself the challenge in February 2020 to attempt a new winter record for the 214 Wainwrights.
Check out the story below#2x214Wainwrights pic.twitter.com/8xtVmTiEnC