My interlocutor looks at me slightly dumbfounded.

“You can just shorten it to SVT.”

“I mean, not exactly. It can fatigue the cardiac muscle, which might be a problem, but rarely does anyone succumb to it.”

I rest my palm on my chest over where the thumping drum of life pounds away slowly.

“I guess, if you are running full pelt for two minutes, your heart is right up and you aren’t able to form a full sentence because you are out of breath…it’s sort of like that.”

“But it can happen when you are tying your shoe laces.”

“Damn. Should you currently be running 10 miles from the nearest road on a mountain in shorts then?”

When I was in my late teens, I was “diagnosed” with SVT. Those of you who have run with me might know what I am talking about.

At some point on a run, I can experience a sudden, stratospheric increase in heart rate. I can be running along quite happily at 130bpm – and then be at 190bpm for really no reason.

It isn’t always exercise induced, though. It has happened when tying my shoes, stretching, emptying the dishwasher, climbing stairs, hopping off a step. Often I can tell it is about to happen, just due to the way I have moved.

This does not happen all the time, I must add, and I rarely experience the “warning” symptoms of dizziness and nausea. Bouts can be half a year apart, or a few hours, it is totally sporadic.

When my heart does decide to have its own little party, it can last anywhere from two minutes to thirty. And when it stops – it stops. Within a single beat, it can drop straight back to resting, as quickly as it jumped to maximum.

Why am I telling you this? Well, let me explain some things first.

Supra-ventricular tachycardia (SVT) is a cardiac arrhythmia that affects around 35 in 100,000 people.

In the picture below, you can see the heart has two nodes, the SA and AV, happily pinging off electrical signals to contract the heart. Along with that is the atrioventricular bundle (a bundle of His, or Hellos, or any other form of greeting, I guess).

What happens is an incorrect electrical signal is emitted around this bundle, causing the heart to rapidly accelerate over 100bpm. When exercising, it can obviously go higher.

Essentially, the bundle of His wants to steal the party and send the happy bu-bump of the heart into a bubumbubumbubumbubum.

I cannot remember exactly what made me go to get my heart checked out. I remember when I was around 16 or 17, I was given a mini ECG machine. Any time I got a bout of SVT, I was to slap several sticky readers onto my body and record it with a machine.

Naturally, this was hard, because the bouts were totally unpredictable. No matter, I got some and sent them back to the hospital.

Diagnosis sounds too scary, so I prefer “identification”. The doctor told me I had SVT.

Well, acute treatment can be used with a drug called adenosine (for those of you who did anatomy, yes, this is art of the adenosine tri-phosphate chemical which assists in energy production).

That isn’t a long-term solution, though. Beta-blockers are also an option, but that can really lower your blood pressure and, as someone with already low blood pressure, I did not fancy that.

The permanent solution is radiofrequency ablation: a small wire is fed into the heart, zaps the bundle of His to form a slight amount of scar tissue, which resets the whole thing.

Great, so now what?

At the time, I did not want to get the treatment done. I was relatively young, and the doctor said it could just work itself out. He told me to avoid excessive interval training and straining too hard, and I was out.

I then proceeded to go into powerlifting, cycling and hill running, pushing weights and doing intervals. And, to be honest, not much happened. I never go crazy with these things, and I never had a problem in those sessions and, in fact, still don’t. Even when racing, I never have issues.

Nevertheless, the discourse started to change around heart health in athletes.

Now, SCD is a different beast altogether to SVT. However, these were still young, incredibly fit athletes who also tended to be male that were dying due to SCD.

A close friend of mine had two friends pass away due to the condition. Meanwhile, high profile instances of SCD, particularly in cyclists, hit the news. Michael Goolaerts’ death during Paris-Roubaix raised serious questions over the safety of young cyclists and athletes in general.

Although I was not at imminent risk of cardiac arrest (the risk in SVT is very low), my friend was adamant I get my heart checked out. Indeed, with greater discussion about heart health in young people thanks to organisations like CRY, people are getting screened for serious heart issues.

Back to the present

Recently, my instances of SVT had become slightly irritating. After moving out, I had started running with new people. The last thing I wanted to do was to be blowing out my backside to keep up thanks to my rather rubbish super-powered heart going into hyperdrive.

As it is with these things, it tends to be a self-fulfilling prophecy! As soon as I got anxious about it, the SVT would kick off. Classic. I’d then have to do the: “Yeah, well, it isn’t that serious, and I have had it checked, and it is not going to kill me it is just annoying, sorry it’ll go away.”

Or, I will make the excuse to need to take a leak just so I can try get rid of the thing. This usually involves pinching my nose and blowing hard (a valsalva, as it is known). So, if you run with me and go “Huh! Ross has been in the bushes for a while,” and see me emerging looking cock-eyed and red-faced, do not be alarmed.

Success rate for the valsalva manoeuvre is about 80%, but when it does not work, that is really annoying.

Recently, I spoke with my masseuse about it. Her daughter has some heart issues too – and does horse vaulting, spending time upside down which makes her face look like a beetroot (her words, not mine).

She theorised it was to do with the preload of the heart that was causing my episodes. A lot of the times it kicks off (bending down, running after not moving for a time, sudden jumps, etc.) the preload to the heart increases. The science sort of loses me here, but any further information you may have, let me know!

Anyway, all I really know is the frequency of the bouts has increased slightly of late, and it is just annoying now. So, I went back to the GP. 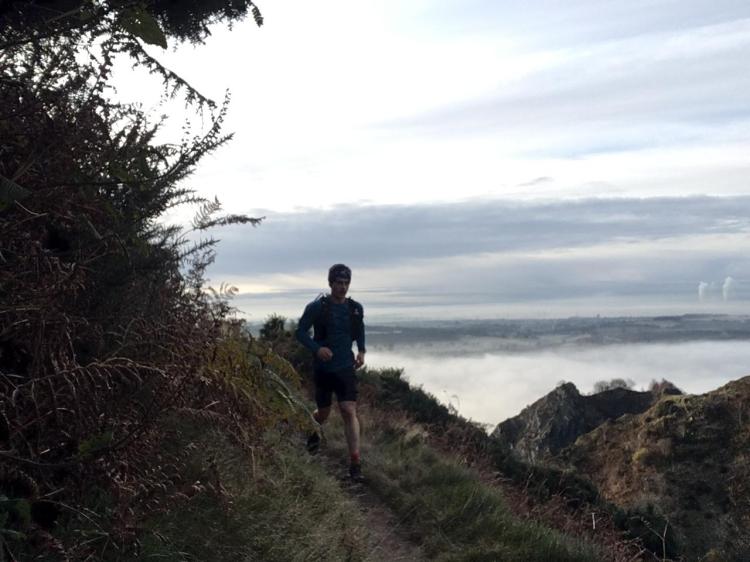 Back to the GP

I lay half naked on the white bed in the GP’s, a small nurse applying a dozen cold patches over my body.

“I see. Through the woods?” she asked, indicating towards the Hermitage beyond Dunkeld.

“Sometimes, but usually up the hills.”

She looked away from the ECG monitor and looked at me. “You run up the hills? Like Birnam?”

“Yeah, but I enjoy Munros and stuff.”

We quickly got chatting about her brother, who likes to climb Munros, but “I don’t know how anyone could run them!” she exclaimed. She was great.

“Well, your heart rate is very healthy. Resting is around 40bpm.”

She quickly popped next door to show the GP. I put my shirt back on. She came back in, saying the GP was pleased at the ECG and would refer me on to the hospital.

Well, now we wait! My referral could take some time. I will be getting the radiofrequency treatment to permanently disable the electrical pinging in the bundle of His to get back to a normal heart rate.

Why are you telling us this?

I suppose the reason is two-fold.

First, do excuse me if you see me emerging cock-eyed and red-faced from a bush.

Second, your heart should not give you cause for concern – it is too valuable. You are doing no one any hassle in getting checked out. If you, or someone you know, are experiencing an abnormality in your heart, get it checked out.

My condition is far from terminal, but I am close to what you would describe as an athlete. I train, I race, my heart is important. As soon as my bouts became more frequent, I went back to the GP.

Until then, spread joy, dream big and keep it wild.