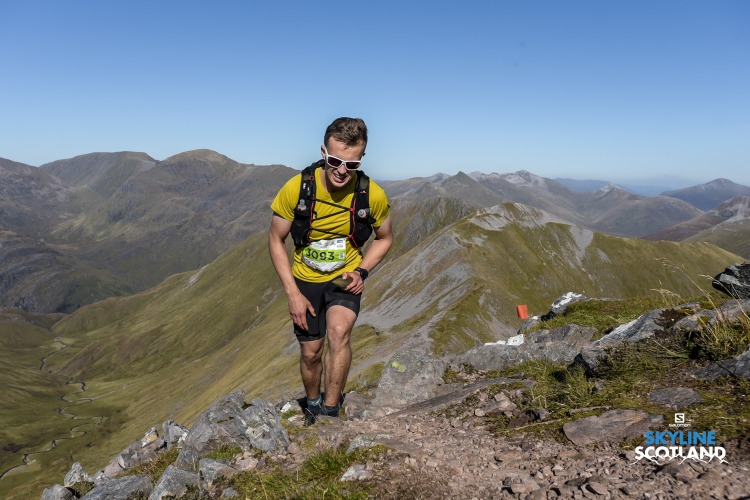 Above me, the cascading sun poured over the surrounding mountains, the autumn light pooling shadows in the creases of the landscape. Below me, the dizzying staircase from the foot of Steall Falls zigzagged up to me.

Now I knew how those who built the pyramids might have felt, looking down to the levels below as their fellow men, bent double in the sun, made their way towards the heavens.

The wind on my face, the sun on my neck – I wanted to lie down and crack open a cold beer right there and then.

It was Muhammad Ali who said something along the lines of: “I don’t count my situps. I only start counting once it starts hurting, because they’re the only ones that count.”

I forged my own timeless aphorism “I don’t count my meters. I only start counting once it starts hurting, because they’re the ones that count.” The big problem for me was, after nearly 2000m, it was hurting – a lot. And I had counted most of them.

I wasn’t exactly floating like a butterfly up An Gearanach, but it was stinging like a huge bee. As I looked around me, though, I could not think of a better place for a pain cave. 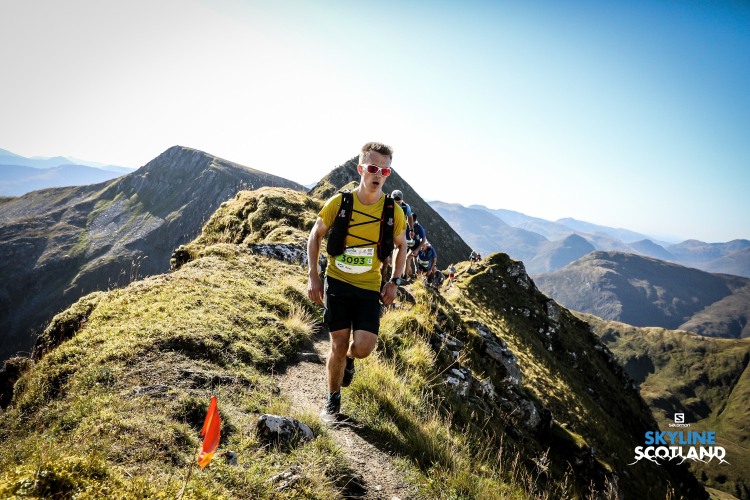 Skyline Scotland had captured my imagination in 2016. I wasn’t running concertedly back then, but obviously had visited the area many times with a rucksack and boots.

That year, Jonathan Albon had swung, climbed, slipped and slid from the obstacle course racing scene into the realm of mountain running, snatching victory from established mountain athletes like Tom Owens, Marc Lauenstein and Finlay Wild.

By the time 21 September 2019 came around, I had done my reasonable share of longer training runs and races – Trotternish, Ochil 2000s.

To the untrained eye, 32km with 2500m sounds more demanding than 28km and 2500m. Yet, the Ring of Steall packs those meters in, gives no quarter, and adds in some ridge running to boot. 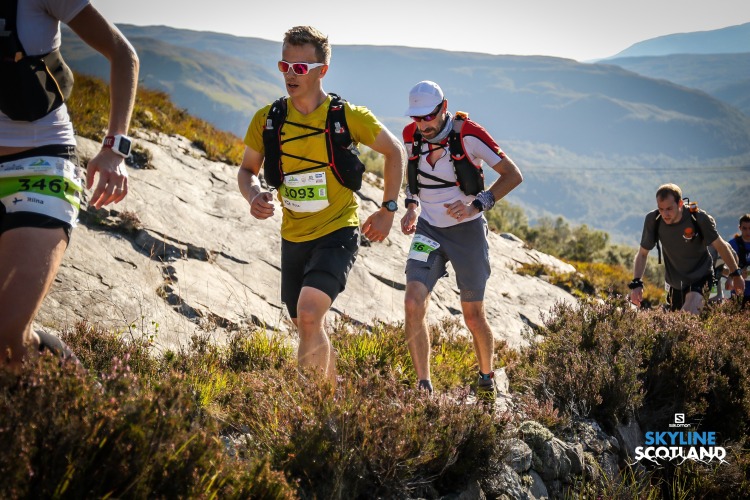 The weather could not have been kinder. Standing in a sun-dappled sea of colourfully-clad runners, chatting excitedly with friends as the build-up music played from the massive PA system next to Ice Factor in Kinlochleven. We could have been on the start of the UTMB.

The massive countdown board ticked closer to 10am. The piper struck up his skirl, the sound bouncing off the roof of the canopy above the start.

The countdown started – take off had arrived.

I was ready, ready for that “GO” and to start running. My heart rate jumped up, ready to head out the gates.

Nothing happened. Well, yet. Such was the volume of runners it was 20 seconds before we crossed the starting line, pounding down the road on the start of a great adventure.

To avoid going down a rabbit hole, 1000 runner is a lot of people on a 26km course. Five hundred would have been a lot, but twice that had me nervous for the impact of the event. Though I know Ourea consult the John Muir Trust, I hope the numbers don’t run away (if you pardon the pun).

The race narrows very quickly, backing up like an airport check-in queue. Some forwent the queue and squeezed past over the embankments, others were happy to stop to breathe.

As we emerged from the trees, a line of hunched figures stood out on the hill side against the clear sky. The open hillside is rocky at first, turning boggy and wet. I passed some more people, being very cautious of my effort.

After an hour, I neared the bealach between Am Bodach and Sgurr an Iubhair. As I came over the lip of the climb, the landscape unfolded in front of me, unfurling like a green mast. Imagine when your lift up a duvet and it slowly settles back to earth, creases forming through it – it was like that on an enormous scale. I was an atom in a giant’s quilt.

I beamed from ear to ear as I continued to climb Sgurr an Iubhair, dropping down and rising again to Stob Choire a’ Mhail. The Devil’s Ridge is veiled in a mythical cloth – noted as a hair-raising scramble.

In reality, it is a simple ridge. The descent before it is like dropping from a rollercoaster, the path swooping suddenly and the sides dropping below you.

Most people dropped to the right, but I knew the ridge and took the quicker bypass path, picking up a handful of spots.

Once over Sgurr a’ Mhaim, I tried to stay sensible: everyone says the descent can trash your legs for the next climb. Whatever you do, the next climb will trash you, so I took a 50/50 approach – at my peril.

If you aren’t full gas or walking a descent, the middle is a dangerous place. So it was I twisted my ankle halfway down. Nothing serious, but enough to shake me up a bit and become overly cautious as the scree immersed itself into my shoes, grit encasing my feet.

After a top up at the aid station, I made up time from the descent along the road, passing some people who’d overtaken me on the descent.

Steall Gorge is famously known for its links to Harry Potter, but there was no broomstick there to take me out of the gorge. I made quite an event of wading through the river (I think a photographer being on me encouraged some Rambo-like splashing). 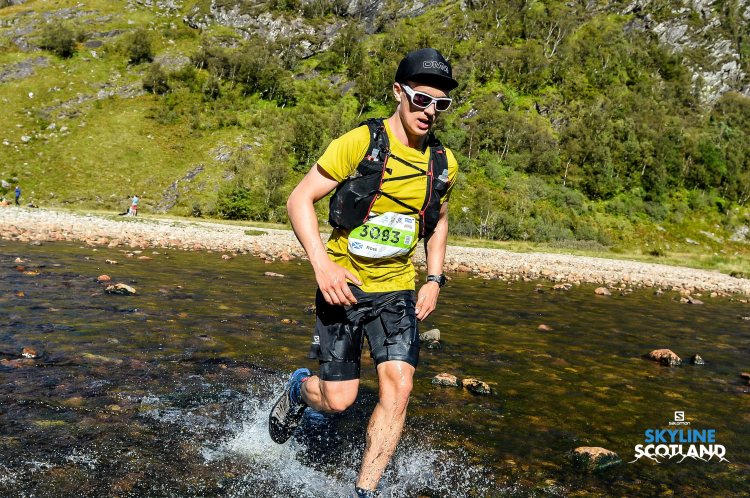 The initial climb up An Gearanach was wonderful. I was refreshed, bouncy, cooled down after my splashing and quite relieved it wasn’t that bad…it didn’t last long.

Like some insane flight of stairs, this infamous climb goes up and up and up. Anyone with some reason would take the direct line through them, but no one had that fire. As one guy below said, “I hope this isn’t a death march.”

If it was, I didn’t realise the stairway to heaven was such purgatory.

After the climb (which, before finally concluding, throws in a final 200m kicker at the end), is the finer of the day’s ridges. Although the exposed edge can be bypassed, the congestion was such I took the ‘racing’ line across the arête, drawing a few scolding looks from competitors below. In the end, it is a race.

As I descended into the fold between An Gearanach and Stob Coire a’ Chairn, I could hear bagpipes in the wind, shouting, cowbells, barking – was there a crowd on the next summit? Or is this some level of Dante’s Inferno – have I lost it?

Soon, though, I met the exuberant dog, barking to every competitor. As I neared the summit, I could see the drones of the bagpipes, skirling out a dizzying AC/DC song. It was just two guys and a girl, screaming at everyone going past like they were your best friends, smacking a pan and piping to the sky and back.

As I left them, Flower of Scotland rang out. I confess to a being a total sop here and being glad for wearing sunglasses. I blame the altitude, the previous 18km and 2000m of climbing for making my chin wobble.

A friend who had perhaps gone out a little too hard had ground to a halt on Am Bodach, the final climb and the last ‘scramble’ of the day. The heat, dehydration and wind were mixing together to turn some people’s stomachs upside down.

My heart dropped slightly as I got over the summit: the delirium had not left me yet, and I genuinely thought we had another climb to go, before realising it was the back of Sgurr an Iubhair again. Thank God.

I had caught my second wind after the piper, and skimmed down into the bealach and began to descend well into Coire na h-Eirghe. The passage of almost 1000 runners had turned some of the bogs into soup, conveniently concealing some of the more problematic rocks. I rolled my ankle again – this time it really hurt. 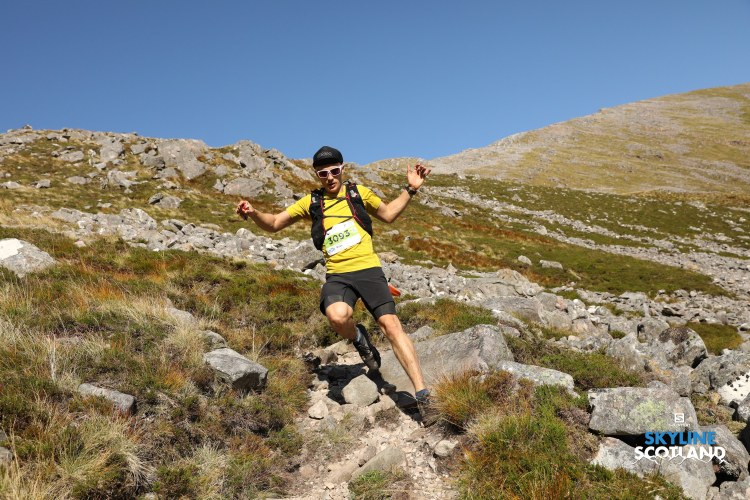 “Mother of ****, ****”, I blurted out as some poor old lady passed me. I felt she might clobber me about the lugs for my profanity, but thankfully not.

After a few gingerly-trod meters I tried to loosen up again. Eventually, once we hit the West Highland Way again, I felt like I at least had a foot again (albeit a sore one), and pushed into that wall of effort. I imagined myself like a bulldozer, passing people on the little rise and just grinding on.

It was just 3km to the finish. My descent through the forest was smooth considering my battered ankle, picking up a few more spots.

As I neared the road again, I chanced a glance at my watch. My goal time of 4 hours 30 had passed 50 minutes ago, but I could still finish in sub 5 hours 30 minutes. 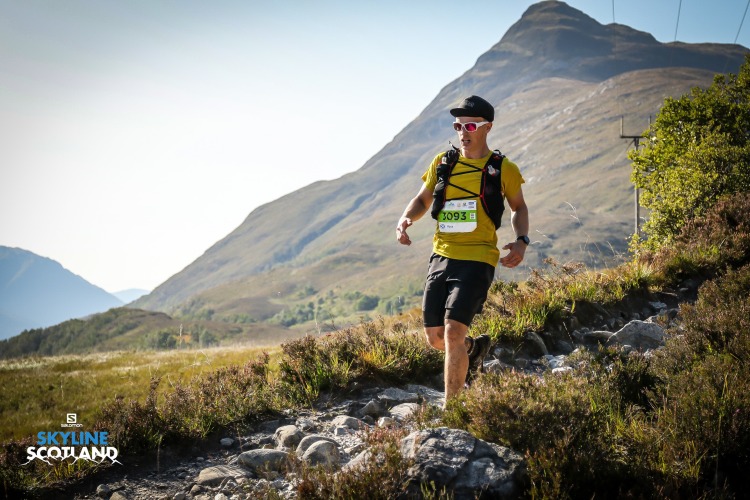 I touched tarmac and starting swinging my arms like I was skiing, creeping around the bend to bring the finish straight in sight. As if I was drugged, the 100m stretch to the line seemed to extend beyond reason, but I had started to switch off, utterly determined to blast through this like I was being chased for the win.

Everyone was cheering like I was the leader, it was phenomenal. Cowbells rang out, transporting me from Kinlochleven to Zegama, Zermatt, Colorado, the Pordoi couloir – all those places I had seen in videos during the Golden Trail Series that had got me so excited for the day.

I rounded the corner, the MC saying something and a photographer there to catch me crossing the line. I didn’t look at the time above me. I later found out I had managed sub-5:30 – by about 10 seconds.

I was beaming. As I stood in front of a giant picture of Emilie Forsberg with a medal in my hand and smiling at the camera, I had resolved – one minute after finishing – I was coming back. Somehow, although I was 110th, I felt like I was a professional and had won the race, such is the nature of the event. 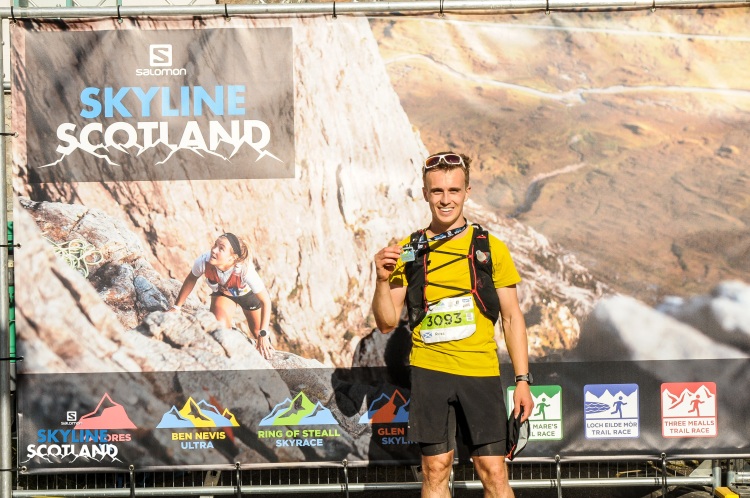 I had hoped to be faster but, in the end, what captured me about this race was the venue. Perhaps my legs screamed for me to stop so I could turn around and admire where I was. I am pleased that I heeded their wants occasionally, reminding me of how lucky we are.

We go through a lot of pain, realising our weaknesses. But more than the limits of our own body humbling us, it is the mountains that do. Sure, I can do that outside of a race, but competition is the greatest testing ground, and if it helps others connect with wild places then so be it.

Hopefully it inspires them to give back to these beautiful places to conserve it for future generations.

Steall Gorge and the summit of Ben Nevis are both protected by the John Muir Trust, the conservation charity for wild places in the UK. If you want to learn more about the Nevis property, visit the Trust’s website. Ourea Events gives 1% of sales to the Trust to mitigate environmental impact of the Skyline Scotland events.